The fight for the family

THE FIGHT FOR THE FAMILYThe adults behind children’s rightsby Lynette Burrows1999, 96pp Price: £6.50,

This expanded and updated second edition of Lynette Burrows’ book demonstrates how the children’s rights lobby, having little grass-roots support, uses the law to alter, not reflect society. Successive governments, influenced by the European Union, have used the Trojan Horse of children’s rights to crush a number of adults’ rights. As a result, adults are being intimidated and dominated by a political spirit that is increasingly obsessed with control. The book shows how Sweden ‘s anti-smacking law has been used as a vehicle for a totalitarian attack on the family. Numbers of children have been unjustly removed from their parents by a law designed to prevent child-abuse but which includes everyday parental correction in its definition. This is vital reading for parents and people of influence. 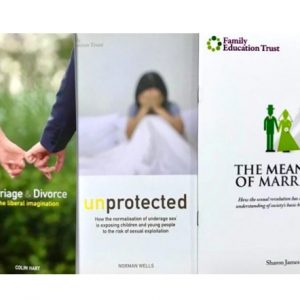