Letter to the Education Secretary about inappropriate materials used in schools

We are contacting you to express our grave concern about some of the materials being promoted by the Department for Education for use in schools. 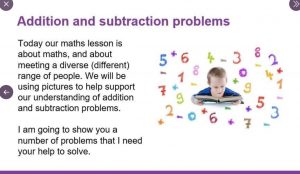 Of particular concern is a tweet issued on the Department’s Twitter page on 21 June endorsing the work of an organization called Just Like Us.  Among the resources promoted by this organization is one aimed at Maths lessons in Key Stage 1 (ages 5-7). Children are presented with the following mathematical problem:

Harley does not like to be referred to as he/she or him/her so when we describe Harley we use they/them. This is because Harley feels strongly that they aren’t a boy or a girl, so uses they/them pronouns.

Talk to your partner and discuss how many bottles of water Harley needs to buy. You have 3 minutes.

The above exercise represents an extraordinary misuse of education in order to further an ideological agenda. While presenting as a simple exercise in mathematical problem solving it is in fact an exercise in the subversion of language in order to promote a transgender ideology. The object appears to be less about how many bottles Harley needs and more about testing children on what are Harley’s ‘correct pronouns’. This is likely to be extremely confusing and troubling for children who are only 5-7 years old. The very same children will go to their English class where they will learn the correct uses of ‘him’, ‘her’, ‘them’, ‘they’ etc. Any pupil would fail a test in basic English if they referred to a single individual as ‘they’. Thus, an attempt to teach children Maths becomes an occasion for the subversion of English and of biological reality. This is an exercise in pure indoctrination and thoroughly age-inappropriate.

That the Department for Education is recommending groups who promote resources is concerning in light of recent events. It appears to fly in the face of the present government ‘s admirable caution in dealing with gender issues.

We welcome the statements made by Women and Equalities minister Liz Truss in September 2020 rejecting gender self-identification, yet here is a blatant example of the promotion of such self-identification to primary school children. In the last few weeks, we have welcomed the government’s increasing recognition of the dangers posed by Stonewall’s embrace of trans ideology and the withdrawal of government departments from Stonewall programmes.

All these positive developments, which are in the interests of the safety of children and young people, are effectively rendered meaningless, if exercises like that cited above continue to promote gender self-identification to children as young as 5.

We would urge the Department for Education to distance itself from groups like Just Like Us and cease to support programmes that promote transgender ideology at the expense of children’s education and welfare.