Scotland bans smacking, we look at the consequences. Kiera Bell and gender ideology, the no fault divorce bill, RSE materials for school, and much more...

Welcome to our Winter Bulletin! We hope you enjoy reading it and look forward to receiving any comments or questions about the concerns raised in this issue.

Please email any comments to our Communications and PR Officer lucy.marsh@familyeducationtrust.org.uk 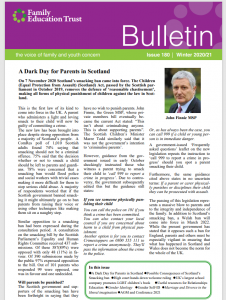 A Dark Day for Parents in Scotland 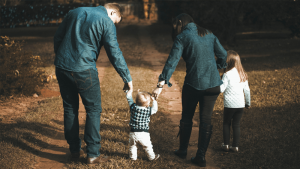 In November, the Scottish courts passed a new law which bans smacking children. This is the first law of its kind to come into force in the UK. A parent who administers a light and loving smack to their child will now be guilty of committing a crime.

Professor Robert E. Larzelere, a world-renowned expert in child developmental psychology, explains why Scotland’s ban on smacking is such a bad idea, looking at research from other countries who have implemented a ban.

On 1 December the High Court ruled in favour of 23-year old Keira Bell who had taken legal action against the Tavistock and Portman NHS Trust, which runs the UK’s only gender identity development service for children. We look at the ruling from the three High Court judges, which effectively blocks children from being given experimental puberty blocking drugs.

Herts for Learning, the largest school support company of its type in the UK, provides learning materials for schools. It has recently been advertising a book for children aged 3-8 called It’s All OK By Me, which features androgynous gingerbread characters who are from different “ethnicities, gender, culture, religion, families and abilities. The book covers all layers of diversity & teaches the child to accept, celebrate and embrace themselves and ALL others.” We are concerned that the book is blatantly biased in favour of LGBT and transgender ideology.

We are pleased to announce that the ‘Alive to the World’ book series is producing a new UK edition of its books which promote marriage and family values through fun storytelling and child characters which young children can relate to easily. They are a useful resource for families and schools to teach RSE.

We review at a new book by Dr Sharon James about the transgender issue. It is primarily aimed at a Christian audience but is based on the best research evidence and is an invaluable resource to people from all backgrounds wanting to know more about gender ideology.

Gender Self-ID – the Government won’t approve this…or will they?

The government responded to the results of its 2018 consultation on Reform of the Gender Recognition Act 2004 in September, in which it asked questions about whether a diagnosis of gender dysphoria was still necessary before a person could receive a Gender Recognition Certificate (GRC). While the outcome contains no radical changes to current legislation,  the House of Commons Select Committee on Women and Equalities has subsequently launched its own consultation asking many of the same questions.

Marriage and Divorce in the liberal imagination

We have published a booklet, in collaboration with the Coalition for Marriage, which discusses the benefits of marriage and the harm done by easily available divorce. Find out how to order your copy. 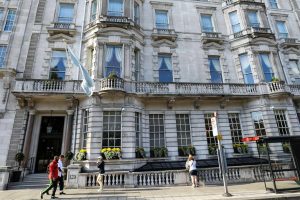 The 2021 Annual General Meeting and conference of the Family Education Trust will take place at the Royal Air Force Club in central London on Saturday 3 July 2021. We look forward to seeing you there!

Find out more about all these stories by downloading the Winter Bulletin below.